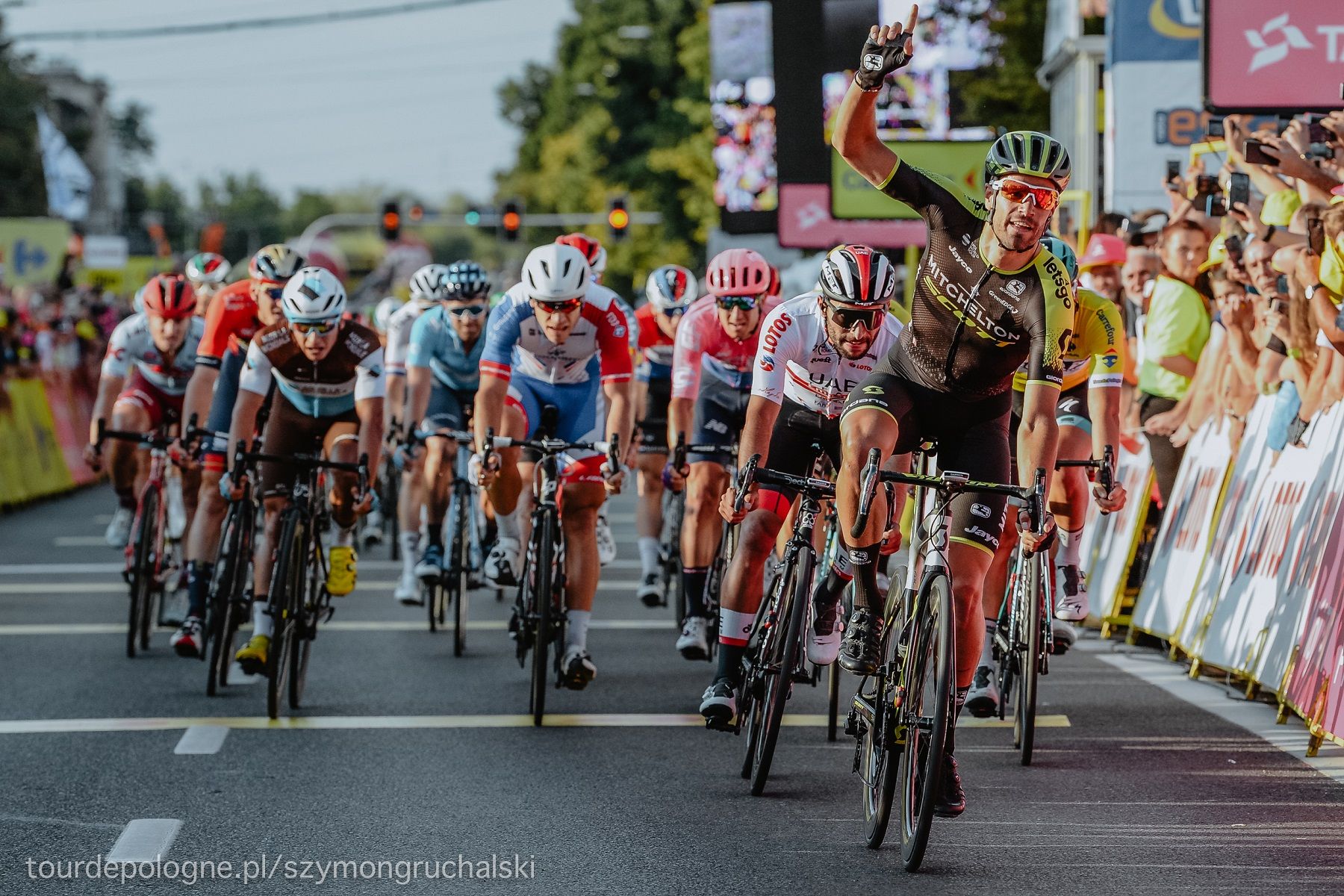 In second place in the general classification for the Tour de Pologne we find Charles Planet (Team Novo Nordisk), who was a fugitive again today for the second day in a row, just one second behind the German. Gaviria is third, 2” back.

The arrival in Katowice, in front of the Spodek Arena, has earned the title throughout the years as the temple of cycling velocity, for sprints reaching more than 80 km/h. This year Mezgec won here with a top speed of 82.16 km/h, besting the previous record set by Belgium’s Jonas Van Genechten (Lotto Belisol), who had won in 2014, sprinting at 80,8 km/h.

The second stage took off from the historic and spectacular Tarnowskie Gory square. The first part of the stage was lit up by an attack by two riders, Pawel Franczak (Polish National Team) and France’s Charles Planet (Team Novo Nordisk), who holds the magenta Tauron jersey as best climber after also breaking away yesterday in the first fraction. The two reached a maximum advantage of about 5’30”, but even today the team for Ackermann in the yellow jersey and the other sprinting teams didn’t leave the fugitives much leeway; the final sprint in Katowice was too important and prestigious to let them get away.

The two fugitives got caught by the group at the beginning of the last of three laps (19.1 km each) on the final circuit in Katowice. It all ended in a furious sprint, with Mezgec getting the better of Gaviria and Ackermann today.

Thanks to the points he garnered breaking out on today’s gpm, Charles Planet (Team Novo Nordisk) strengthened his lead in the classification for the Tauron magenta jersey for best climber, and he also captured the Lotto blue jersey as the most active rider in the group.
Pawel Franczak leads the Lotos classification for best Pole in 6th position of GC.

The Tour de Pologne is an important event for the entire nation, as emphasized by the fact that Poland’s Prime Minister Mateusz Morawiecki and Minister for Sports and Tourism Witold Banka were on the stage today to award the winners.

“This was a fantastic win in Katowice and the fastest sprint in the Tour de Pologne. It was a great win for me, I’ve been coming here for seven years now and I was always second, third, fifth, top ten many times but I was missing a victory. So today everything came together and I had a bit of luck with good wheels, and also found a good spot to come out and yeah, everything came together and luckily I won. This is the first win in a World Tour in a long time so it’s a good moment. Sure, I won a stage in the Tour of Slovenia and had a nice training camp at high altitudes so I’m really glad I could win today because that means that I’m on a good wave and in good shape also for coming races” says Luka Mezgec, winner of today’s stage. This win was Mezgec’s first at WorldTour level since 2014, when he obtained wins at the Volta a Catalunya, Tour of Beijing and on the final day of the Giro d’Italia in Trieste.

“Yellow jersey in the second stage, for the fastest sprint it’s really difficult to find the best position and the best way, because you can never see where the other guys are coming from and you saw that Mezgec came from the back at a really, really high speed and he was the winner today. Now before the mountains we have another stage for the sprinters and we’re going to try it again tomorrow. And keep this yellow jersey maybe. We want to try to keep it tomorrow but in the mountains we’ll give it to another team, maybe to Rafa Majka or Davide Formolo” says Pascal Ackermann in yellow jersey.

“Two stages, two breakaways and two jerseys… it’s been an amazing start in the Tour de Pologne for me, to be honest, I cannot believe it. One jersey was already really nice yesterday but today I get to wear two. I’m really proud of the effort and I’m really proud to show my fighting spirit and what I always say is my philosophy, to always be on the attack and always go full gas in the breakaway. This is how I enjoy cycling and for all people affected by diabetes, this is really nice to show them that for two days in a row I can fight in the front and wear two jerseys. That’s really cool” says Charles Planet 2nd of the GC in magenta & blue jersey.